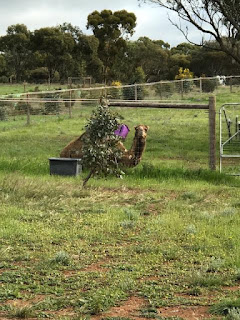 A ten-day camel trek through the South Australian outback. With your parents. 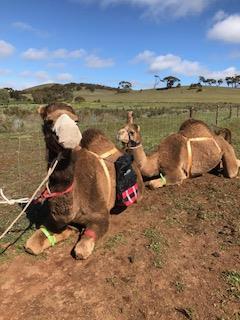 Hi, I'm aware that you're very busy but want to ask whether it's possible to come to your place for a week or two with my 2 camels? To do some training? I would sleep in my little tent and be self sufficient. Certainly would pay (depending on a quote). Warm regards

I hope this email finds you well and thank you for contacting us.
We are fully booked until the end of November after which point I am then committed with several overseas projects and then our season starts again in April 2018. This month I only have a few days not sleeping in a swag and it's all large school groups now until the end of November.
P. is also no longer working with the Camels on treks out and I am utterly exhausted managing the business largely on my own with S.. When November rolls to completion I collapse and regain just enough strength to head overseas.
I had thought you were doing well with P.H. as I liked your Camel Channel page and read your posts? Might he be able to assist you further?
The only thing I can think of offering is slotting you in as a volunteer helper / learner at some stage. I am pretty tough though with people who have difficulty following instructions and not keeping up! If you're friends with G.H. on FB you could ask her ... she's joined me on several occasions learning and could offer you a heads up. I can't however add in camels I don't know or haven't work with. Our risk assessment practices are professional and avoid accidents for guests and camel crew.
Let me know your thoughts.

Thank you very much for your detailed answer!
The reason I contacted you was your new business name  "... and Commercial Camel Training" so I thought you would provide camel training for third party as well. Sorry for misunderstanding.
I removed my page 'Camel Channel' because P.H. was very annoyed about me posting videos about his camel training course.
Some time ago you wrote I could bring my camels to your place for a period of time. Is this 'boarding' service still available? Could I bring them to you until midst of December? Perhaps my naughty girl will get some discipline - nothing helped till now (getting a nose peg, having a new lovely 6 year old bullock, having 2 old [15 + 30 years] experienced camels for some time on the same paddock, working km behind ute,...). I would try everything to calm her and stop her from fighting and pushing.
Thank you again, regards

Yes we do training but on a commercial scale for overseas export and thankfully we haven't had any recent training work because trek work has been insane!
I am sorry things didn't work out with P. ...
I can hear that you are desperate for support and I know you have remained committed to working with your camels for a long time now.
I think you best give me a call.
I will see what I can offer you in November and December but I would charge for my time.
Sincerely

Things can change in a heartbeat!
Yesterday - when I contacted you -  I was desperate about the camels. The first time I attached a self-made saddle bag to the harness and they were freaking out. Jamahl (the bullock) rolled and shit himself and I felt so bad. So I wrote the email to you.
Today I received a phone call I should come to an assessment clinic in Adelaide tomorrow because they found some abnormalities in the breast screening I did the week before. If I need surgery or chemotherapy I don't know what to do with the camels. Therefor my request whether I could bring them to you?
.. I will no longer annoy you with emails! I will wait and see what they will find. It'll take 8 days for the results of biopsy.
All the best

I am honestly hoping that further investigation will see that you are clear from any concern that would require surgery or treatment. Fingers and everything else possible crossed for you here.
In regards to the camels I cannot suggest that they can join our mob on the Station because we are experiencing a drought up here and have pressure on us to move our camels off here if rain is not forthcoming soon. We are currently attempting to purchase a small acreage nearby as we only have a 9 acre block behind our house. I could offer you this as a temporary solution, however you would need to assist with the purchase of hay and this could be done directly with the suppliers / hay carters so that you were aware of what your money was spending. I am hoping and thinking you only have 2 camels, please advise me otherwise.
I may very well be out of range with the camels by the time your biopsy results arrive and will not return to the office until the 17th and only just sporadically before heading out again to attend to another school group on the 18th. This whole month is fully booked with three school groups.
Warm regards 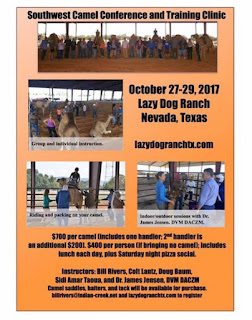