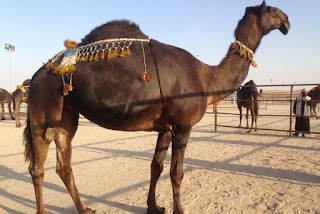 
The art of naming your camel

Anna Zacharias   |  October 19, 2014
One of the first words Arabic instructors love to teach their students is al jemel, the camel. I have never heard this word used once at the track, perhaps al jemel simply does not suffice.
In the Arabian Gulf, people usually refer to camels as al hejin, a generic word for race camel. Or they refer to a camel by colour (al hamra, the red one), gender (al naga, the cow and al baer, the bull) or age (al thenaya, the five year olds).
These are just the basics.
Christopher Neil lists 60 different names for camel.
There are names for how often a camel drinks:
A camel who drinks every two days: al ghab
A camel with unquenchable thirst: al melwah
A cow that leads others to the watering hole: al salouf
A cow that doesn’t drink to cure herself: al mqameh
Then there are names for a different breeding camels:
A stallion ready to breed, as evident by his lean stomach: al hyaj qafl
A cow with a calf younger than six months old: al khlfa
A cow continuously mourning a dead calf: al khlouj
A cow whose calf has died and been forgotten: al kfout
A cow that produces frothy milk: al jdhour
A cow that will not agree to be milked: al nhous
And there are names for camels of different personalities:
A camel afraid of anything: al jfoul
A camel that loves to escape and will not be caught: al shroud
A camel that eats whatever it sees: al aklu
A camel that stomps its feet on the ground: al kbout
A cow superior to all others in anything it does: al faheea
In addition to his list, there are names for the age of a camels, of which I know nine.
There are camel named by profession like a qalissa, a docile mature camel that trains calves.
There are personalities that include the aged and lethargic camel (al sharif), the young camel that’s easily ridden (al mataya or al rahila) and the camel who wanders like a lost soul (al haml).
Most important are the names of origin. Race camels fall into three categories: Sudanese camels (al sudaniyat), Omani camels (al omaniyat), local camels of Al Najdi origin (al mahaliyat orra’iyat al dar, which means mistresses of the land) and crossbreeds (al muhajjanat).
In addition to slender asayel race camels, there are dusky and tall majahim beauty camels of Saudi origin.
But none of this matters, because most of the time, people refer to a camel by it’s breed.
There are the breeds named after camels of such formidable speed, stamina or breeding prowess that descendants carry their names. They include Shaheen, Jabbar, Hamlool, Soughan, Tayyara, Samha and Al Misk, to name but a few.
By my count, there are easily more than 100 words for camel in Arabic. And that’s why the simple word camel just won’t do.
um 12:35:00